All donations are tax deductible

as allowed by law. 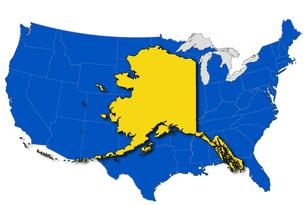 It is the 49th State of the United States, larger than Spain, France & Germany

·   It covers a vast 586,412 square miles.
·   The heaviest snowfall in Alaska-Thompson pass with 974.5 inches.
·   Tallest mountain is Mount Denali at 20,300 feet.
·   Largest natural freshwater lake in Alaska is Lake Iliamna at 1,150 sq. miles.
·   Longest river is the Yukon River at 1,400 miles in Alaska-1875 total.
·   Largest glacier is the Bering Glacier at 2,250 sq. miles.
·   World’s largest concentration of bald eagles along the Chilkat River north of Haines with more than 3,500 bald eagles
·   America’s biggest earthquake occurring March 27, 1964, Good Friday,  9.2  This is the strongest ever recorded in North America.
·   Second greatest tide range in North America at 38.9 feet near Anchorage in Upper Cook Inlet.
·  Approximately one third of Alaska lies above the Arctic Circle.  A point at which the sun does not set for one day at summer

-The state flower is the "Forget Me Not."  Once you visit Alaska, you can never forget it!
-Outsiders first discovered Alaska in 1741 when Danish explorer Vitus Jonassen Bering sighted it on a voyage from Siberia.
-Russian whalers and fur traders on Kodiak Island established the first settlement in Alaska in 1784.
-In 1867 United States Secretary of State William H. Seward offered Russia $7,200,000, or two cents per acre, for Alaska. On October 18, 1867 Alaska officially became the property of the United States. Many Americans called the purchase "Seward's Folly.
-In 1943 Japan invaded the Aleutian Islands, which started the One Thousand Mile War, the first battle fought on American soil since the Civil War. Agattu, Attu, and Kiska are the only parts of North America occupied by Japanese troops during World War II.
-Alaska's most important revenue source is the oil and natural gas industry.Alaska accounts for 25% of the oil produced in the United States.

-Prudhoe Bay, on the northern Alaskan coast, is North America's largest oil field.  The Trans-Alaska Pipeline moves up to 88,000 barrels of oil per hour on its 800 mile journey to Valdez.
-The fishing and seafood industry is the state's largest private industry employer.
-Most of America's salmon, crab, halibut, and herring come from Alaska.
-The term Alaska native refers to Alaska's original inhabitants including Aleut, Eskimo and Indian groups.
-The willow ptarmigan is the official state bird. The Territorial Legislature adopted it in 1955.
-The Sitka spruce is the official state tree. The Territorial Legislature adopted it in 1962.
-Dog mushing is the official state sport. The Alaska Legislature adopted it in 1972.
-The Alaska Highway was originally built as a military supply road during World War II.
-The state boasts the lowest population density in the nation.
-The discovery of gold in the Yukon began a gold rush in 1898. Later gold was discovered at Nome and Fairbanks.
-Alaska is a geographical marvel. When a scale map of Alaska is superimposed on a map of the 48 lower states, Alaska extends from coast to coast.

-The state's coastline extends over 6,600 miles.
-Alaska is the United State's largest state and is over twice the size of Texas. Measuring from north to south the state is approximately 1,400 miles long and measuring from east to west it is 2,700 miles wide.
-17 of the 20 highest peaks in the United States are located in Alaska.
-The state's largest city is Anchorage; the second largest is Fairbanks.
-In 1915 the record high temperature in Alaska was 100 degrees Fahrenheit at Fort Yukon; the record low temperature was -80 degrees Fahrenheit at Prospect Creek Camp in 1971.
-Aurora borealis (northern lights) can be seen an average of 243 days a year in Fairbanks. The northern lights are produced by charged electrons and protons striking the earth’s upper atmosphere.
-Alaska is less than 50 miles from Russia.
-Alaska is the only state that does not collect state sales tax or levy an individual income tax (some cities have sales tax, however).
-The largest salmon ever caught was at the Kenai River. It weighed in at 97.5 pounds.
-There are more than 3,000 rivers and 3 million lakes in Alaska.
-Alaska has more coastline than the rest of the United States combined (more than 34,000 miles).
-Alaska has more inland water than any other state (20,171 square miles).
-Alaska is the only state to have coastlines on three different seas: the Arctic Ocean, Pacific Ocean, and Bering Sea.
-The state bird of Alaska is the willow ptarmigan.
-More than half the world’s glaciers can be found Alaska.
-Barrow, 800 miles south of the North Pole, has both the longest and shortest day. When the sun rises on May 10, it doesn’t set for nearly three months. When it sets on November 18, Barrow residents do not see the sun again for nearly two months.
-Each year Alaska has about 5,000 earthquakes including 1,000 that measure above 3.5 on the Richter scale. Of the 10 strongest earthquakes ever recorded in the world, three have occurred in Alaska.
-Giant vegetables are common in Alaska due to the extremely long days in summer. Alaska has grown a record cabbage weighing in at 94 pounds.
-The Pribilof Islands are home to the largest seal colony with over one million seals.
-About 52 percent of Alaskans are men – the highest percentage of any state.
-Alaskan Kodiak and Polar Bears can grow to 1,400 pounds and 11 feet tall. Moose can grow to 1,350 pounds with antlers spanning up to 6 feet wide.
-It is illegal to whisper in someone’s ear while they are moose hunting in Alaska.
-Alaska has no plants poisonous to the touch. Poison ivy and poison oak are found in all other states. Also, no snakes!
-The nation’s two largest forests are located in Alaska. The Tongass in Southeast includes 16.8 million acres and Chugach in Southcentral has 4.8 million acres.